Ort: Virtual event via Zoom (the Link to the event will be sent by request via email )

The talk will present the argument that we do not live in a postmodern or late modern world but in hyper-modernity. Beyond naming-calling or labeling, at stake is the realization that in the current situation the various problems that came up in the itinerary of modernity were not properly mended, corrected, or overcome, rather – in spite of any occasional improvements – it represents an escalation of the same trends; in many aspects already reaching quite absurd results. The current lockdown is a typical example of such absurd, anticipated by thinkers and writers like Michel Foucault (the chapter on Plague in Discipline and Punish) and writers such as Albert Camus (see The Plague), and was also theorized in my previous books as a paradoxical state of ‘permanent liminality’, that follows a ‘trickster logic’.

Analyzing this entrapment requires both genealogically oriented historical social and political theorists (Nietzsche, Weber, Foucault, Elias, Voegelin), and political anthropologists (van Gennep, Turner, Radin, Mauss, Bateson, Girard), but also can make use of a series of scholar-writers: either writer, whether travel writers or novelists, who nevertheless also engage, inside and sometimes even outside their novels, in scholarly, historical, anthropological or philosophical reflections and analysis; or scholars whose works extend to and incorporates, even centrally, literature. Examples include Michel Serres, Hermann Broch, Heimito von Doderer, Lewis Hyde, or Roberto Calasso, It will be argued, following my two books published with Routledge about sociology and novels, that when sociology and philosophy are dominated by analytical and positivistic approaches, mostly countered only by (post-)Marxist and (post-)Freudian critical theories, then a serious understanding of our condition is often much helped by novels.

Notes on the lecture to download can be found here.

About our talk guest: 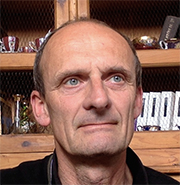 Until 2012 Arpad Szakolczai held the sociology chair at the University College Cork, Ireland. From 2009 to 2012 he was the Acting Head of Department.

In the course of his academic life, Mr. Szakolczai published numerous books, journal articles, and conference papers. The newest ones are A Political Sociology and Anthropology of Evil: Tricksterology.
Agnes Horvath, Arpad Szakolczai (Routledge, 2020) and From Anthropology to Social Theory: Rethinking the Social Sciences. Arpad Szakolczai and Bjørn Thomassen (Cambridge University Press, 2019). For the full list of his publications see here.